Today is January 10, 2017. That means that in ten days, this jerk will become the leader of the free world. Ugh. It still feels surreal to me. In less earth shattering news, the fact that it's 2017 also means that my "SaaS Funding in 2016" napkin needs an update.

As a reminder, in the original post I tried to give a "back of a napkin" answer to this question: What does it take to raise capital, in SaaS, in 2016? Today I'd like to take a stab at the (early) 2017 answer to that question.

Like in the 2016 version, the assumption is that the founding team is relatively "unproven". Founders with significant previous exits can raise large seed rounds at high valuations early on, so the "rules" are different for them. On another note, when I say "what does it take to raise capital" I mean "what does it take to have an easy time raising capital from great investors". If your company doesn't meet the (very high) bar pictured on the napkin it doesn't mean that you won't be able to raise money at all. It just means that it probably won't be easy, that you will likely have to talk to a large number of investors and that you may not be able to raise from a well-known firm.

So, what does it take to raise capital, in SaaS, in early 2017? I don't think a huge amount has changed since I created the first version of the napkin about nine months ago, but here are a few observations:

1) The bar keeps getting higher and higher

I already wrote about the rising table stakes in SaaS two years ago, and since then the bar has kept increasing. The SaaS companies included in Tomasz Tunguz' benchmarking analysis of exceptional Series A companies grew on average from $10k to more than $90k in MRR in their first year of commercialization and then to over $400k of ending MRR in their second: 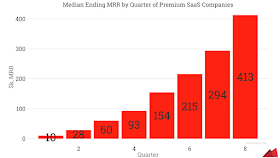 Twilio, Workday, and Zendesk have shown that the best SaaS companies can get to $100M in ARR in 6-7 years and continue to grow at around 50-70% year-over-year after hitting that milestone. Slack, unbelievably, reached $100M in ARR just 2.5 years after launch. Slack is an outlier even among the outliers, but getting to $100M in about seven years and hitting $300M 2-3 years later is the type growth which the best investors in the Valley are looking for in 2017.

I didn't have to make a lot of changes to the napkin to reflect this since the growth rates that I had put into the 2016 version were already in line with the "T2D3 path". I've increased the Series B amount, valuation and MRR range, though, and because the expectations of later-stage investors trickle down to the earlier stages I've changed the ARR potential number in the "Seed" column from "$100M+ ARR" to "$100-300M+ ARR".

2) Being a workflow tool is no longer enough

Investors are increasingly questioning if you can build a large and long-term sustainable SaaS business by being primarily a workflow tool. The thinking is that every successful software product will eventually be commoditized because it attracts lots of people who will copy the product and offer it for a lower price. That concern isn't new, of course, but given how crowded most SaaS categories have become by now, investors are increasingly looking for additional ways to build moat around a business.

So if you want to raise capital for your SaaS startup in 2017, investors will wonder if you can become a true system of record, build a real platform/ecosystem/marketplace or build a unique data asset over time. The latter option will get particular attention this year, so I highlighted that in the "Defensibility" row of the napkin. The ability to gather large amounts of data from the entire user base, and use that data along with AI/ML to make your software smarter, is one of the big themes at the moment. For what it's worth, I know AI and Machine Learning are a hyped topic but I think the hype is justified.

You might think that some of the things that I've written here – getting to $100M ARR within a few years, thinking about $300M ARR at the seed stage – are just crazy. I won't argue with that. The vast majority of SaaS companies will never get to this level of growth or scale, and yet they can be successful and profitable companies that generate life-changing wealth for the founders and great returns for early investors. VCs need outliers to make their business model work, but that's not your problem. If you think you don't have strong potential to become one of these crazy outliers, maybe VC isn't right for you.