When founders show me their sales pipeline, the data is typically visualized in some variations of one of these formats: 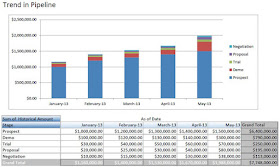 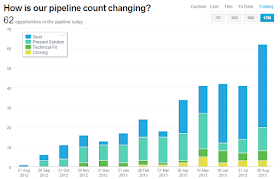 When I see charts like this, I often find it hard to quickly wrap my head around the data and draw meaningful conclusions. Sometimes, important numbers are missing altogether. In other cases, they are there but are shown on another page or in another report.

I then find myself wonder about questions such as:

With this in mind I tried to come up with a new way for high-level pipeline development visualization, one that makes it easier to quickly get to the key take-aways. If you're interested in the (preliminary) result only, check out this mockup. If you'd like to learn more about my thought process and some additional details, read on. 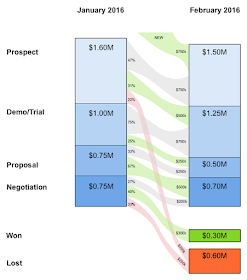 The "pipes" give you a better understanding of what happened to the leads in a certain stage and month. For example, you can see that of the $1.6M that was in "prospect" stage in January:

The next step was to add a few additional months to the mockup: 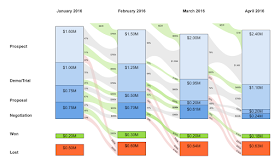 This unfortunately made things a little messy, and people will probably feel overwhelmed by the amount of numbers. One solution, if someone decides to build a little application like a Salesforce.com add-on, could be to hide all of the pipe numbers by default and show them on-hover (maybe with an option to show them all at once): 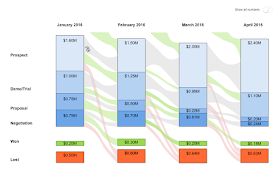 ... and a better way to quickly grasp how these numbers have changed month over month: 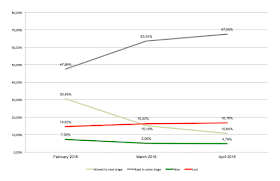 Here's one mockup with all three elements on it: 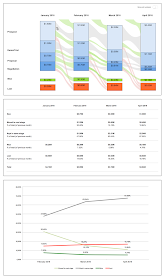 What you can quickly see in this example is that this imaginary startup is adding an increasing dollar amount of prospects to the pipeline and keeps closing deals, but the rate at which it moves leads to the bottom of the funnel is declining. At the same time, the percentage of lost deals has been growing slowly, while the percentage of deals that remained in the same stage has increased sharply, indicating an increase in sales cycle and/or a poor job of pipeline purging. This has already led to a shrinking bottom-of-the-funnel pipeline, and if the company can't figure out and fix the cause of that development, it will soon close less and less deals.

All of this is something that you can immediately see by looking at these charts and numbers and which I think is usually harder to see by looking at traditional pipeline charts. What do you think? Looking forward to your comments!