The problem with month-over-month growth rates

Most fundraising decks contain a slide with a chart that looks roughly like this:


Chart #3 and #4 are good for a LOL (or a “WTF!”, depending on your sense of humour), and fortunately we’re not getting too many of these (if you don’t know what I’m talking about, take another look at the charts). A chart that looks similar to #1 or #2 is something we look at on a daily basis, though.

What all of these charts and their headlines have in common is that they’re trying to convey exponential growth. Since traction is the #1 factor that determines fundraising success, it’s understandable that founders try hard to show exponential growth (which talking about a m/m growth rate implies). This is especially true if you’re one out of 50 startups that present at a “demo day” and you have three minutes to get investors excited. At some of the demo days that I’ve attended, I felt like this led to an arm’s race for the highest growth rates and sometimes made me feel like this: 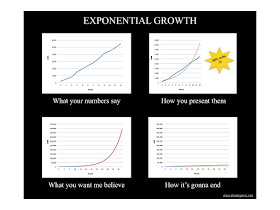 As you can see, chart #1 shows very strong signs of exponential growth: this (fictional) company’s MRR is growing at a relatively steady rate of 18-21% per month, and the amount of net new MRR which the company is adding is growing every month. Mathematically this looks clearly exponential, and yet, since the absolute numbers are still so low, unless you understand the drivers behind the growth you don’t know if there’s real, sustainable exponential growth (e.g. due to product virality) or if it’s just a series of step changes which makes the numbers look like exponential growth.

If this sounds like an academic question to you, think about its impact on the company’s growth projections. If there’s true exponential growth at a rate of around 20% per month, the company’s numbers will quickly go through the roof. If, on the other hand, the growth isn’t driven by inherently exponential drivers, you should expect the growth rate to decline quickly, leading to much lower projections.

Now let’s turn to the data behind chart #2:

If you take a closer look at the numbers, you can see that in contrast to chart #1, in spite of the chart’s headline and trendline, it doesn’t look like something’s growing exponentially here. The monthly growth rate is higher than 10% in all but two months, but it’s fluctuating heavily and the amount of net new MRR is going up and down. You can calculate a growth rate of 40% per month on average or a compound monthly growth rate (CMGR) of 35% without having to lie, and you can have Excel draw a trendline using an exponential regression. But I believe this is highly misleading. A more reasonable way of describing this company’s revenue growth would be to say that the company has been adding between $300 and $700 in net new MRR per month in the last ~ 12 months.

Again, all of this may sound somewhat academic, but I think it has practical relevance in two ways: The first one is about how you communicate your numbers to potential investors when you’re fundraising. The second one is about how you’re projecting growth and what targets you’re setting for your team. Let’s take a closer look at both of them.

1) When you’re talking to investors you of course want to show your numbers in the best possible light, and to say that you’re increasing revenue by $300-700 per month (to use the example from above) may not sound as exciting as a CMGR of 35%. However, keep in mind that experienced investors have very fine-tuned BS antennas, and if an investor gets the impression that you’re getting too creative in your interpretation of your data, that’s a huge turn-off. Therefore I’d recommend the following:


2) As far as your internal goal-setting goes, the problem with an exponential growth assumption is that for early-stage startups it makes short-term goals too easy and longer-term goals too hard (unless you’re one of the 0.0...1% of startups that have a viral growth engine with a viral coefficient greater than 1).

Let’s say you’re starting (almost) from zero and your goal is to be at roughly $80k in MRR in 12 months. If you’re assuming a constant m/m growth rate it looks like this:


The blue line shows the total MRR at the end of the month; the orange bars show the net new MRR added in each month; and the red line shows your monthly growth rate in %. As you can see, you have to add pretty tiny amounts of net new MRR per month until around month 6 in order to reach your goals. Then it goes up quickly, and in the last two months of the year you’ll have to add $20-30k per month. The problem with a plan like this is that if you’re at $8000 after month 6 you think you’re on track, but actually you’ve only achieved 1/10th of what you have to achieve in the year.

You can of course expect that you’re getting better throughout the year as your product matures and as you’re doing more sales and marketing, but I think the slope of plan #1 is too steep. A more helpful and more realistic plan would look like this:


In this version you reach the same result after 12 months, but how you’re getting there is different. In contrast to plan #1, plan #2 doesn’t assume a constant m/m percentage growth rate. It assumes that the amount of net new MRR that you’re adding per month is growing, but on a linear basis. That may make the chart look less exciting, but I believe plan #2 is much more useful. If you use plan #2 and you’re on track after 6 months, it’s much more likely that you will still be on track after month 12.

To sum up, my recommendations for modeling growth:

[Update 12/12/2015: As a followup to this post, I created a simple (Google Sheets based) calculator which you might find helpful for your planning.]