From an investor’s perspective, SaaS companies have a lot to love: High gross margins, predictable (recurring) revenues and capital efficient operations. On the flip side, most of them follow a common thread when it comes to growth. It might be too much to label it the ‘long, slow SaaS ramp of death’, but their revenues tend to develop slower than those for consumers plays. How come? In contrast to B2C companies like Uber, Delivery Hero or Homejoy for which it was critical to get the unit economics right, scaling distribution is usually the toughest challenge for a SaaS startup after it has found product / market fit. And this is understood by the markets.

If you are looking at the assumptions for frameworks like ‘T2D3’ and growth projections as outlined by Christoph recently, SaaS companies are typically expected to scale to $100m in revenues before approaching an IPO. You can also see this growth pattern in reality, here is a telling graph of the median SaaS revenue level pre-IPO that I borrowed from Tom Tunguz: 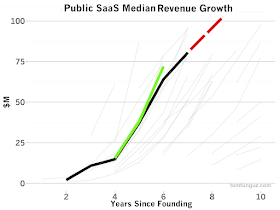 There is no question that growing to $100M in revenues in 7-9 years is an impressive achievement and doesn’t sound like a long, slow ramp of … anything. But if you compare that with Spotify’s estimated revenue of $1B in 2014, some 9 years after founding, you quickly see that there has been a significant difference in scale of successful consumer and enterprise businesses. This holds true for other consumer focused internet companies as well. As you can see, all but one member of this cohort have reached or are on track to reach $1B in year 6 (at the latest!): 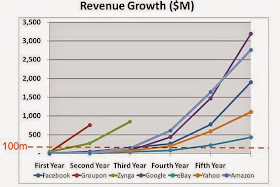 At this point I want to stress that clearly all revenues are not equal and due to high margins, customer lock-in and predictability, $1 in SaaS revenue is really something else than say $1 in e-commerce revenue. But it’s fair to say that historically IPO prospects in the B2B field could not match the explosive revenue growth of successful B2C companies.


Something is changing though. Look at these growth curves: 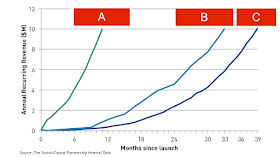 (taken from this great presentation by Mamoon Hamid and slightly edited)

You guessed right, they are all SaaS businesses. And while you could argue that the revenue growth curves of Company B and C still roughly follow the slope of a long, slow SaaS ramp of death to an IPO and come in around the median we saw at the beginning of this post ($2.5M-4.5M ARR after two years and $8M-12M after three), Company A is on steroids! It’s Slack (and B and C are Yammer and Box respectively).

And while that is pretty wild, I couldn’t even fit Zenefits on there properly, because with $20M ARR in under two years and a goal of $100M after three, it’s literally off the charts. Admittedly, I can't say for sure that this reported 'ARR' is net revenues or what exactly their COGS structure looks like, but either way their pace is incredible. 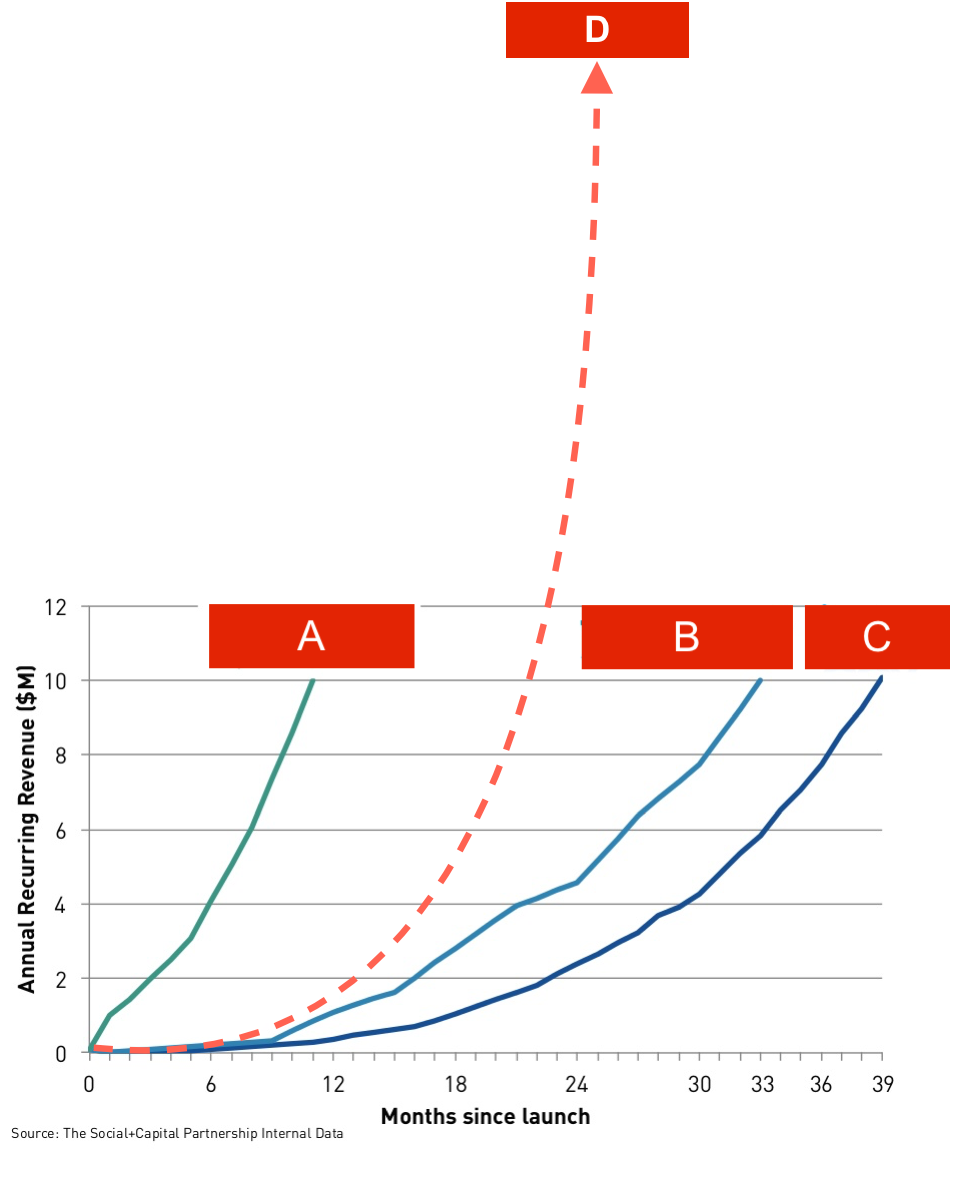 Are we starting to see SaaS companies taking shortcuts and adopting consumer growth curves? Let’s quickly take a look at these two examples and see what they did differently.

You are probably using Slack, but if not just have a look at the twitter love they get. Yes, looks like they are the hottest thing on the block since KoolAid. Although I am personally not 100% sold on all design choices, the way it handles integrations and plays nice on all platforms is quite impressive. I am sure that word of mouth and referrals are the key traffic drivers for them.

Second, it’s free. At least until you hit 10k messages. And by then it is likely that you are already locked-in. So are you going to become a paid customer? What if you commit to Slack now, but your team slowly drops off and you pay for these users anyway? Fear not as Slack will only charge you for monthly active users! Pretty clever, huh?

How much are you paying for your HR software right now? How about $0, plus you can manage benefits through the platform with a few clicks? Hard to deny that value proposition (although we believe that this is not one-size-fits-all and best of breed solutions like our portfolio company Humanity will win large parts of the market).

So they ‘just’ had to push that value proposition into the market. And with push, I mean push real good, as according to LinkedIn, there are over 100+ people in sales roles at Zenefits. And that’s a company in its second year! Compare that to Atlassian or Zendesk, which didn’t have a proper salesforce until they reached thousands of customers.

So what does this mean? It’s a bit too early to predict how these two specific stories play out, but this much seems to be true:


It’s important to note that both cases here are horizontal SaaS solutions that are attacking broad markets. I haven’t seen a vertically focused cloud company scaling this fast, but who knows what the rest of 2015 holds. I’m curious to see how this new playbook for hyper-growth in SaaS develops.