Some time ago my friend (and co-investor in Clio, Jobber and Unbounce) Boris Wertz wrote a great blog post about "the only 2 ways to build a $100 million business". I'd like to expand on the topic and suggest that there are five ways to build a $100 million Internet company. This doesn't mean that I disagree with Boris' article. I think our views are pretty similar, and for the most part "my" five ways are just a slightly different and more granular look at Boris' two ways.

The way I look at it can be nicely illustrated in this way: 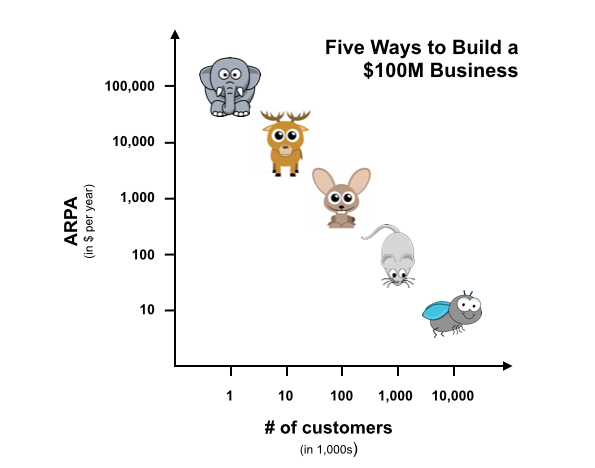 The y-axis shows the average revenue per account (ARPA) per year. In the x-axis you can see how many customers you need, for a given ARPA, to get to $100 million in annual revenues. Both axes use a logarithmic scale.


To build a Web company with $100 million in annual revenues*, you essentially need:

In order to get to 10 million active users you need roughly 100 million people who download your app or use your website. This is of course a gross simplification, and the precise number depends on various factors like your conversion rate, how active your users are, churn, etc. But it doesn't change the take-away: To get to $100 million in ad revenues, you need dozens of millions of users. I know of only two ways to achieve that (plus one mega-outlier which breaks all rules, Google). The first one is to have a product that is inherently social and has a high viral coefficient (Instagram, Snapchat, WhatsApp). The second one is a ton of UGC (user-generated content), which leads to large amounts of SEO traffic and some level of virality. Good examples of this second option include Yelp or our portfolio company Brainly.

To acquire one million consumers or prosumers who pay you roughly $100 per year, you need to get at least 10-20 million people to try your application. This is – again – a gross simplification, but I believe it's order-of-magnitude correct. To get to 10-20 million users you almost certainly need some level of virality, too – maybe not Snapchat-like virality, but some social sharing or "powered by"-virality. Great examples of this category include Evernote and MailChimp. If you're an eCommerce business you might be able to acquire one million customers using paid marketing, but it requires huge amounts of funding.

Most SaaS companies that target small businesses charge something around $50-100 per month, so their ARPA per year is around $1k. To acquire 100,000 of these businesses you need something in the order of 0.5-2 million trial signups, depending on your conversion rate. Let's assume that your CLTV (customer lifetime value) is $2,700 (assuming an average customer lifetime of three years and a gross margin of 90%) and that you want your CLTV to be 4x your CACs (customer acquisition costs). In that case you can spend $675 to acquire a customer. If your signup-to-paying conversion rate is 10% that means you can spend $67.50 per signup (assuming a no-touch sales model where your CACs can go entirely into lead generation).

So how can you get one million signups for less than $70 each? Most SaaS products aren't inherently viral, there usually isn't enough inventory to make paid advertising work at scale, and cold calling usually doesn't work at this ARPA level. There's no silver bullet, but the closest thing to a silver bullet is inbound marketing – besides having a fantastic product with a very high NPS (net promoter score) and being obsessively focused on funnel optimization. I've written about this in more detail in my "DOs for SaaS startups" series: Create an awesome product, Make your website your best marketing person, Fill the funnel, Build a repeatable sales process. Another option is a an OEM strategy (i.e. getting your product distributed by big partners), which can work but comes with its own challenges.

Interestingly, hunting rabbits looks much less straightforward than hunting flies or hunting elephants. Why we have a strong focus on rabbit hunting SaaS companies nonetheless is something for another post.

If you're a deer hunter and want to acquire 10,000 customers paying you $10k per year each, most of the rabbit hunting tactics still apply. An ARPA of $10k per year usually isn't enough to make traditional enterprise field sales work, and you likely still have to get 100,000 or more leads. The main difference is that when you're hunting deers you can use an inside sales force to close leads, potentially also to generate leads. It also means that you can pay VARs and channel partners an attractive commission, although I've rarely seen this work in SaaS.

SaaS companies sometimes start as rabbit hunters and expand into deer hunting over time. This can work very well and we're very excited about these types of businesses, but to successfully execute this strategy, SaaS founders with a product/tech/marketing DNA usually have to bring in an experienced VP of Sales who has built an inside sales organization before.

Like it or not, most of the biggest SaaS companies derive most of their revenues from selling expensive subscriptions to large enterprises. Workday, Veeva, SuccessFactors, Salesforce.com, you name it. Jason M. Lemkin, another friend and co-investor, once said (I'm quoting from memory) that if you have a good solution for a significant problem experienced by large enterprises, building a $100 million business is relatively straightforward. After all, you only need 1,000 customers, and the $100k you need from each of them is less than they spend on the salary of one executive. I think there's a lot of truth in that.

The other part of the truth, though, is that it may take you several years and millions of dollars to find out if you really are solving a problem (a.k.a. product/market fit), and once you're at that point, you still need tens of millions of dollars or more to finance the enterprise sales cycle. This does not at all mean that elephant hunting isn't attractive. It just requires very different skills, which usually means a founder team with enterprise sales DNA.

[Another update: Here's an infographic version of this post.]

[Yet another update: We turned the post into a poster!]

* If you have $100 million in annual high-margin revenue, you will likely be able to exit for $500 million to $1 billion or more. That's the kind of exit most venture capitalists are looking for, although we as a small fund can achieve a great fund performance with somewhat lower outcomes.