[Update 12/20/2013: I have extended the dashboard to include multiple pricing tiers and annual subscription plans. Check it out here.]

[Update 01/17/2015: There's a new company called ChartMogul (which we invested in) which makes it easy to get a real-time dashboard similar to the template below. Check it out!]

Over the last few years I've helped quite a lot of SaaS startups to create or fine-tune their KPI dashboards. While every situation is a bit different there's also a lot of overlap, which made me think that it would make sense to publish my template (not without polishing it a bit). I hope other SaaS startups will find it useful, and it will also make it easier for us to communicate what KPIs we're looking for when we talk to SaaS entrepreneurs.

Not surprisingly the dashboard looks quite similar to the financial planning sheet that I've posted some time ago. Below are two Excel screenshots, and

here is the Google Docs version.

The sheet contains some notes on the right side. I was going to note a few additional things here but it's gotten really late here in Europe so I'll leave that for another day. If you find any bugs, let me know and I'll fix them tomorrow morning. :)

One comment, though. Although I've developed this sheet on my own, I've learned a lot about SaaS metrics from David Skok, who I am very thankful for. David created a SaaS dashboard as well, it's a bit more sophisticated and has a slightly different focus, but it's quite similar. Check it out, and if you have not read his brilliant articles about SaaS yet I highly recommend that you do so. They are an absolute must-read for every SaaS entrepreneur. 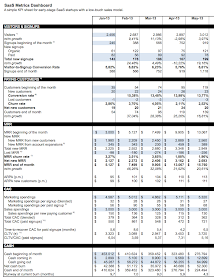 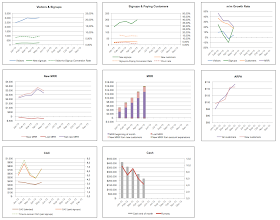